Some ten years ago I was first confronted with elements of the Training Within Industry (TWI) program. Since then I have been digging into TWI more and more and last month I had the opportunity to immerse myself for a whole week into the world of TWI during the TWI Summit 2013 in Savannah, GA. This visit didn’t only allow me to attend the actual summit, but also to invest another three and a half days in more in-depth TWI workshops and to become certified in Job Instruction (JI). An account of what apparently was called “the miracle” by W. Edwards Deming and what often is seen as the missing element in many Lean journeys. 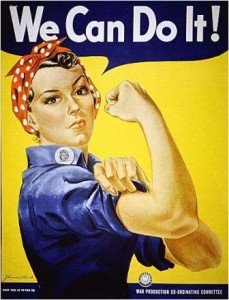 The TWI program was set up in the US during World War II. Large numbers of workers were called up into the US army, navy and air force, and possibly even more, but new and inexperienced, workers were needed to maintain and even further increase war production. It was clear that the necessary production volume and the required quality could only be reached if large investments would be made in training, improvement of working methods and leadership. To address these needs, three methods were developed: Job Instruction (JI), Job Methods (JM) and Job Relations (JR).

After the Second World War, the TWI program was used as part of the re-building efforts in mainland Europe and Asia and was especially well received in Japan. In this way, TWI became a foundational element of the Toyota Production System (TPS) and what is nowadays known as Lean. The influences of Job Instruction (JI) can clearly be seen in Lean elements like standardized work, on-job training and the skill matrix. Job Methods (JM) has strongly influenced problem definition, process analysis, waste recognition, kaizen and A3-thinking and doing. And finally Job Relations (JR) has helped shaping Lean leadership in aspects like coaching and questioning.

On the first day of the Summit I attended two workshops, both delivered by Patrick Graupp and Bob Wrona of the TWI Institute. The first workshop introduced the history and concept behind the TWI concept, going as far back as the training principles laid down in Charles R. Allen’s 1919’s (!) publication “The Instructor, The Man and The Job”. And as Patrick Graupp indicated “TWI JI is standard work for training”, eliminating the demonstrated shortcomings of telling and showing only through a clear 4-step method (preparation, presentation, application, and testing) and learning-by-doing.

Unfortunately, on the shop floor I still hear supervisors saying: “how many times do I have to tell you” far too often. The TWI mantra “If the worker hasn’t learned, the instructor hasn’t taught” apparently didn’t land everywhere yet… The actual job instruction for tying the Fire Underwriter’s Knot also clarified how important it is that the trainer knows how to actually do the job. Makes you think about current supervisors and managers when speaking of the leader as trainer and coach…

My only criticism on the workshop is that most of the time is spent on JI, and far less for the JM and JR methods. Fortunately, this was easily compensated while attending some JM- and JR-oriented sessions during the actual Summit. 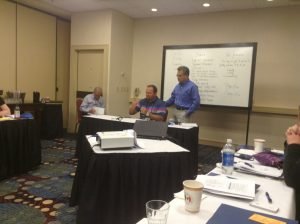 The second workshop by Patrick Graupp and Bob Wrona was about introducing TWI into an organization. Next to the typical themes, relying strongly on the work of John P. Kotter, this workshop also highlighted the important role Job Breakdown Sheets (JBS) play in developing a JI- and subsequent JM-program. To be able to instruct, you need a JBS and you need one. This means JI starts with finding and agreeing (between workers, shifts, management and staff) the one best way, which interestingly enough also immediately starts the improvement discussion.

At the end of this second workshop it was my conclusion that it probably is better to position TWI more like “TWI inside” than like a TWI “add-on” to your Lean initiative.

The actual one and a half day TWI Summit started off strongly with a key note presentation by Mr. Kaizen himself, Masaaki Imai. He acknowledged that TWI should be part of any Lean journey and that it is up to the supervisors, managers and leaders of an organization to train the organization’s associates. Clearly, kaizen is a central element in any such Lean journey. And standards play a crucial role: without revision of standards one cannot even speak of improvement, Imai stated. A common Western misconception thereby is that kaizen without direction is a very useful activity. It isn’t. And despite that Imai’s messages are not really innovative, he does have the capability to make the true purpose of kaizen and the kaizen way very clear to the audience. In this way he also again underscores that managers should never take stories or even data in a report as being the truth. Only the gemba holds t
he facts based upon which managers should base their judgment. In his presentation, Imai leaves no doubt as to what he thinks about managers that do not go to gemba. Later that day I was one of the twenty five people invited to the private reception with Imai and to meet Mr. Kaizen personally; a great privilege!

Of course it is difficult to summarize a one and a half day summit in a short blog post, therefore only a few highlights. Christine Hannon of Albany nicely positioned all three basic TWI methods (JI, JM and JR) in the broader perspective of TWI’s problem-solving method that is in use at Albany. I think the background to the initiative at Albany in fact is very recognizable in many organizations: (1) root causes were not really dealt with and (2) there in fact also was no standardized way of actually doing this upon which associates and management could rely. It was now how Hannon concluded with saying that TWI has helped her to develop a more “Can I handle this on my own?” attitude within Albany.

Donnely’s Sam Wagner shared the way in which they have used JM in getting to a level of 19 implemented improvement proposals per employee per year in only three years; a respectable level in such a short period. An interesting comment by Wagner was that he feels there are in fact no poor ideas: “There are good ideas, and there are opportunities for training.” Keeping in mind Imai’s remark about kaizen without direction, it is good to see that Donnely uses so called Idea Activators to get employee’s engaged in improvement. Idea Activators could be initiatives to reduce changeover times, lead time, improve workplace organization or for instance to prevent quality problems.

In the mostly US-oriented program it was nice to see two contributions from Denmark. John Vellema (ex-LEGO) thereby presented his experience at LEGO, shaping an international, multi-site JI program, aspects that were mostly absent in many of the other contributions that were mostly single site case studies. Jens Sørensen and Rasmus Jørgensen van Novo Nordisk shared the very concrete and practical way they have deployed Job Breakdown Sheets (JBS) and JI in their organization. Novo Nordisk has taken these TWI elements and turned them into a an appealing visual on-job-training and assessment approach.

Another highlight for me personally was the opportunity the Summit presented to participate in two hands-on JM sessions facilitated by Mark Warren. Mark is a self-declared TWI-geek and someone that has tremendous knowledge about the history and original intentions of the TWI program, and someone that I already followed for quite a few years in this field of knowledge. While working on improving the job method of a case that we had to bring to the table, using an A3 template, it was therefore not really a coincidence that Mark pointed out that we were actually using the actual A3 form dating from spring 1945.

After the actual Summit I made use of the opportunity to follow the official Job Instruction (JI) training. For me, this was also one the main reasons for going all the way to Savannah and the TWI Summit. In five sessions during the next two and a half day, the instructors from the TWI Institute thereby almost literally follow the original TWI JI Manual (that I already had in my possession before that time). Only in a few instances the instructors deviated from the standard, such as in the situation where the original manual provides the opportunity to put the workers at ease by allowing them to light a cigarette or a pipe… It was also interesting to sometimes being able to hear the instructor in the other training room being almost exactly at the same point in the training as our instructor. Talking about standardization!

To a large extent, the five JI sessions consist of actually trying out the JI method by preparing a JBS of a job you had to take with you to the training (in my case a small assembly), and by using the 4-step method in actually instructing another person in that same job. As expected, actually applying the method is most rewarding, and I especially appreciated the power of preparing the instruction using the JBS. Only then you become in fact aware of what you are actually doing. As Christine Hannon from Albany had already nicely put it in her earlier presentation: “We all think that everybody knows how to do their job”. It’s clear that in fact we probably most often don’t! Furthermore, it proved that the 4-step method is very effective in transferring knowledge and building skill as everyone in the class was able to master the job within fifteen minutes.

After five days, my trip to the US and the TWI Summit was over. I look back at a very well organized conference (thank you Lean Frontiers, Jim Huntzinger and Dwayne Butcher), the opportunity to have finally met a few people I already follow for quite a while, and meeting up with new people active in the Lean and TWI community. This time I can certainly say I did not only return to the Netherlands with new connections and knowledge, but this time definitely also a new skill.

Problem Detection: If Only Parts Could Talk

Delivering upon the Promise of Kanban