Nowadays, you almost trip over the whiteboards scattered around the shop floors of many organizations. In most cases, these boards show data on a set of indicators linked to themes like safety, quality, timeliness, speed, productivity and team morale. The idea is that through this data, teams can track whether they are achieving their objectives. To do so, these indicators should not only show the data on actuals (i.e., the voice of the process), but also specific targets reflecting the area’s objectives. Unfortunately, this is much less common. So how then do we track the team’s contribution to the organization’s goals? And even when I do see targets, I sometimes wonder how they were set. A post on setting targets.

The Origin of Targets

Every company has certain goals. They describe what the organization wants to achieve. Goals are typically long-term and provide direction. For instance, goals could be to achieve zero accidents, zero defects, or zero waste. Objectives are more concrete, specific and time-bound. They break up long-term aims into time-bound pursuits. These could be to reduce the number of accidents by 80% before yearend or to cut the number of defects by half in the next quarter.

To track the achievement of these pursuits, we define measures (or indicators) that we use to collect data from our processes. These measures should, of course, represent the aspects on which the company has set objectives. In Lean (more specifically Hoshin Kanri), these measures are often called control items.

A target then is the desired level of the measure. Data on the actuals (the so-called “voice-of-the-process” or VoP) is then compared to the target. This comparison shows teams how well they are fulfilling expectations set by the targets. This is typically referred to as performance, i.e., the degree to which the team is actually attaining its targets.

When deployed well, targets are directly derived from the company’s goals and underlying objectives. They connect the team’s efforts to the company’s overall goals. It is one of the main elements of the policy deployment method known as Hoshin Kanri.

Voice of the Process and Targets

A target should be achievable and realistic given the time to achieve it. This means targets (and their “parent” objectives) cannot be independent of the current process behavior. Before setting targets, therefore, we first need to understand the behavior of the current process. We need to understand the location of the process (indicated by its mean or median) and its variability (indicated by, for instance, its standard deviation or coefficient of variation).

The above is also why, in the Hoshin Kanri or policy deployment process, we first study the current process. It also implies why arbitrarily set targets, without any connection to current process behavior, are not part of Lean thinking. Top management needs to study processes and invite middle and first level management to the discussion on targets.

When setting targets, we first need to focus a team on controlling their processes. Putting a process under control means you make a process predictable. It involves the elimination of the apparent, demonstrable and assignable (or special) causes of variation. Putting a process under control makes variability predictable and means the process shows no strange outliers or non-random patterns. Again, the process behavior chart can guide us in these efforts. And targets in this phase should focus on eliminating these outliers and non-random patterns from the process.

Targets in this phase should, therefore, be expressed in terms of standard deviation or coefficient of variation, and visually, into tighter and tighter control limits on a process behavior chart. Without such a tightly managed process, setting ambitious improvement targets for the central location or mean of the process is rather pointless, as the process will show too much variation around this target anyway to truly satisfy customers or management. The process will not be capable.

As a third step, teams can now start shifting their predictable and more capable process towards another level. Only at this moment, we can think about setting an improvement target that is related to the mean or median of the process. But it seems to me that this is where most organization start for their teams (if there even are any targets). They start with stating that they need this or that measure to move to a certain level. That is okay for a goal, and maybe even an objective, but for targets, we should be careful. Setting a central target for a process measure whereby the process is not tightly managed or even worse, unpredictable, is not very productive. Management should first help their teams with steps one and two, before setting targets on the mean or median of the process.

When teams arrive at this third step, requiring a true process improvement, chances are that the team will be confronted with out-of-control behavior again, or at least more variation than before the shift was made. This is quite normal, as the team is working using a new process. This brings the team back to square one, tasked with the challenge to put the new process under control again. This never-ending cycle of controlling, tightening and shifting process behavior characterizes Lean’s continual improvement approach. 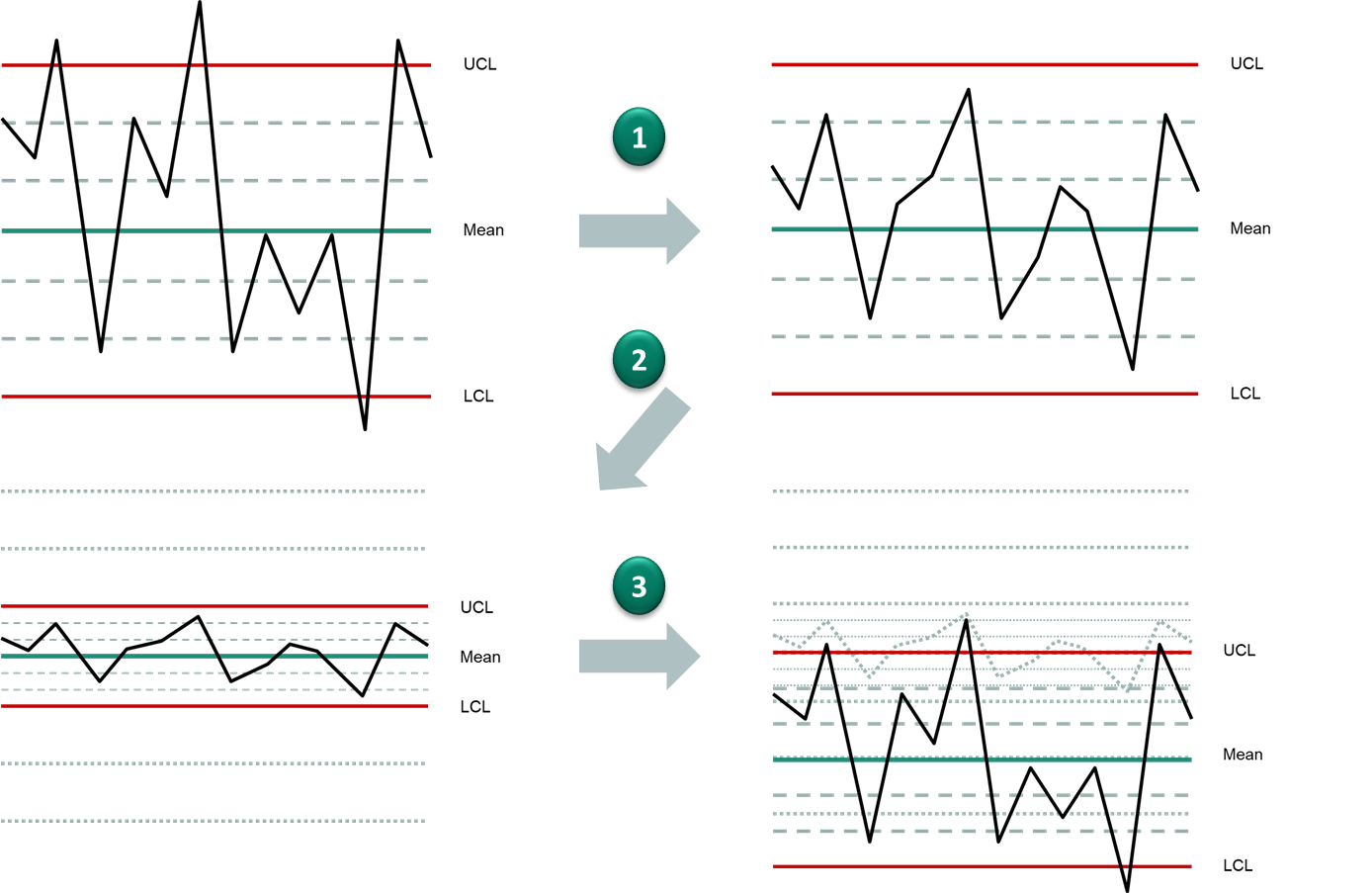 To understand whether teams and departments are helping an organization achieve its objectives and move in the direction of their goals, targets – aligned with the company’s goals and objectives – should be set. And the team’s actual process behavior should be visualized and contrasted to these target levels to give continual feedback to the team.

The targets themselves should be set based on a thorough understanding of the process. This requires managers at each level to invest time in understanding process behavior and to interact with operators and front-line management.

Based upon this understanding, targets should then be set following a logical sequence. First, targets should show non-random behavior and outliers, and these should be reduced. Second, targets should focus on variability, and control limits should be visually tightened on the team’s dashboard. Third, the central line in the control chart should be moved to the next level, and focus should again be on getting the new process under control.

Still, in the end, target-setting is “easy”. Behind it, though, is the hard work of teams and organizations to eliminate the problems and obstacles that are in the way of meeting these targets. Management can guide their people’s efforts, however, by using a logical and achievable sequence.

Lean’s Many Faces: Top-Down or Bottom-Up?